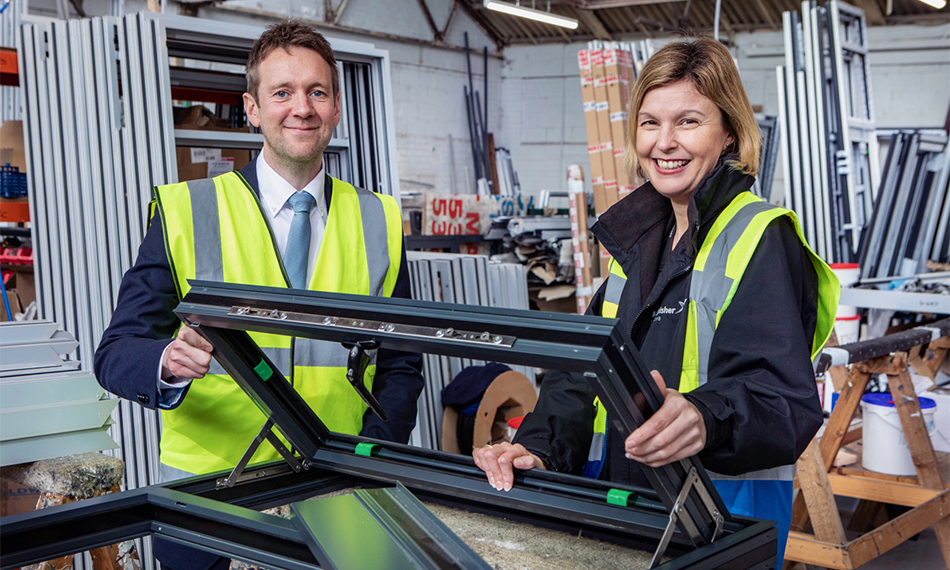 Kingfisher Windows recently added Stellar, the double-award winning aluminium window and door system from Epwin Window Systems, to its portfolio in June. Since then, the company has seen a phenomenal uptake of the new system and the dedicated aluminium factory is busy manufacturing orders for the trade, retail and commercial sectors.

Mark Barker, Production Manager at Kingfisher Windows says feedback about the system has been positive across the board. He and his team have been impressed at how easy the system is to manufacture too. He says: “Stellar is an easy and straightforward system to fabricate and looks superb. It really is a game changer in aluminium system design and looks different from anything else currently on the market which is a big advantage for our customers.”

Feedback from Kingfisher’s customers has been equally impressive. Deborah Beeley, Sales and Marketing Manager adds: “Our installer customers tell us they like fitting Stellar because it’s quick and easy to install thanks to its pre-gasketed, knock in beads. Coupled with the fact that consumers like the slimline, flush aesthetics of the windows and doors, it’s fast becoming the go-to aluminium and door system.”

One of Kingfisher’s installers, Darren Capitano from Abbey Windows in Leeds concurs with this message. He recently fitted 44 Stellar Flush Casement Windows and a French Door in a high-end consumer home. He comments: “I love fitting Stellar – it’s a pre-gasketed system that uses knock-in beads, so it’s really easy to fit. There’s nothing else like it on the market and I think it’s a game changer. Consumers love it too – the low- level gaskets mean the frames look even slimmer, which taps into the trend for big expanses of glass which are so popular at the moment, so it’s a straightforward sell. It really is a stand-out aluminium product.”

Kingfisher Windows work in the retail, commercial and trade sectors and is Yorkshire’s leading manufacturer and supplier of windows, doors and conservatories. It has over 25 years’ experience in the industry, which guarantees a service that is built upon outstanding degrees of professionalism, reliability, efficiency and promptness.

Stellar from Epwin Window Systems has the slimmest sightlines on the market and is also the only aluminium system to offer a genuinely fully flush casement window. It’s fast and simple to fit, 20% faster to fabricate and it uses approximately 30% less aluminium. It’s an impressive set of credentials that sets a new standard in aluminium system design. And as the feedback from Kingfisher Windows and their customers show, it’s delivering what the market needs.