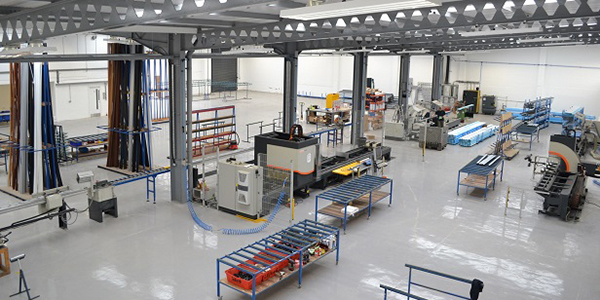 Origin Frames Ltd, award winning UK manufacturer of bi-folding doors, has opened a new production facility at its headquarters in Buckinghamshire as part of the company’s huge expansion plans. The factory opening follows the introduction of Origin’s industry leading ‘Your Lead Time, Not Ours’ service in 2011, which eliminates lead times on its bespoke aluminium bi-folding doors.

The new 18,000 sq ft x 40,000 sq ft factory will support Origin’s new flow line manufacturing process, introduced in 2013 as the company moves towards lean manufacturing; while helping to maintain a 100 per cent record for delivery of its ‘YLTNO’ service.

In early 2013 Origin introduced a new flow line system, giving each factory worker a defined role in the production process. The primary aim of the new system was to streamline work and improve efficiency levels by breaking down each task.

The new production facility will facilitate the flow line production process, which has already allowed the business to double its capacity in the last 12 months, while acting as the main manufacturing hub for its Dubai and US counterparts.

The new production facility has meant Origin has also invested in new machinery and factory resource at its headquarters in High Wycombe. Origin hope the new factory will become a centre of manufacturing excellence within the UK.

Neil Ginger, CEO at Origin, said: “UK manufacturing looks set to be on the rise, and we have found the demand for products carrying the ‘made in Britain’ badge has never been stronger. The new factory has enabled us to expand and cope with the extra demand, while improving efficiency, through the new flow-line process, enhancing the overall quality.

“By investing in the new production facility we hope to uphold our record for constantly delivering to customer lead times as part of our strategy for growth in the year ahead.”

In the last 12 months, Origin has been shortlisted for the National Business Awards and has been awarded the prestigious ISO 9001 certification for excelling in its operations. The globally recognised accreditation is achieved only by businesses that meet the highest management standards and is a stamp of exemplary product and service quality within the industry.