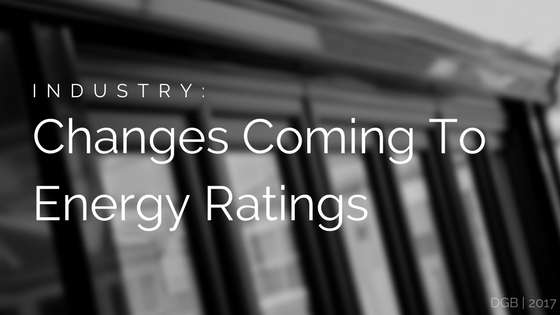 It appears that there are pretty big changes afoot when it comes to the energy ratings label, the label system that was adopted unto windows  few years ago to help home owners decipher which windows are better than others when it comes to energy efficiency.

But with Brexit set to begin on Wednesday, I’m not quite sure how much of these changes will apply to the UK. In a letter published last week by the Energy Saving Trust, this was what was stated would change:

EU
Energy labels to return to A-G range (the end of A+++)
Following negotiations between the European Parliament, Council and Commission, a deal has now been struck on how to replace the current energy labelling rating system (which ranges from G to A+++ for certain products) with a simpler and clearer A-G scale.

There are two main changes as part of the above:

A rescaling of all labelled products to return to an A-G scale. Different product types have different timeframes: for instance 15 months for white goods (dishwashers, fridges and washing machines), TVs and lighting appliances, a general six years limit for other products and a ‘slow track’ of 9-13 years for heaters and boilers. Once all A+ and above rated products are removed if 30% of a product type are in class A or 50% in class A+B then a further rescaling is also triggered.

Setting up a product database. This will make it easier for consumers to compare the efficiency of products and improve market surveillance. The database is expected to be operational from 2019.

These changes form part of a wider range of changes that are being brought in as part of the Energy Union package.

To be clear, these are new plans that will span across all products that have energy ratings labels. This does include windows here in the UK. So these are changes that would potentially affect us so long as they are done before we actually leave the EU.

I do also like the idea of a new product database with the aim of helping consumers compare the energy efficiency of products. In the vastness that is the world of consumer consumption, something like this is very much required.

I am happy to see that the powers that be have decided to scrap the use of multiple +’s once products have become more efficient than the original A band represented. It was something that was turning the energy ratings label scheme into a joke. It was difficult to be serious with a home owner about how efficient windows were when you kept having to repeat the word “plus” two or three times after explaining what an A rating was.

It is going, but not quickly. As the statement above reads, there is a timescale on how quickly this rescaling back to the A-G range will happen. White goods get it in 15 months, six years if products are classed as “general”, not sure what that means. If its items like boilers or heating, it’s 9-13 years. And you can bet your last old quid and first new shaped one that windows are going to be put in that last decade long category.

This is where I think these plans might start to lose their traction here in the UK. On Wednesday Theresa May will trigger Article 50, finally, which will see us start the negotiation process to leave the EU. The day after she is also due to lay down the framework for what is called The Great Repeal Act. This will be legislation that basically carbon copies all EU laws into UK law, where the Government will then have the power to strip away what isn’t required or relevant to the UK. So here’s the catch, you can only copy into UK law what’s already there, and I don’t think these plans have yet been ratified by the EU. So, the UK may leave the EU without these plans in place, which means we’re likely to have a Window Energy Ratings scheme for quite a few years where we are stuck with multiple +’s after the A rating.

Now, we have some negotiating to do with the EU. So it might be the case that the UK may get to use EU-wide energy ratings for windows in this country. In the grand scheme of things this is one of the smaller, insignificant details of the mass negotiations that will need to be done. But for us as an industry, this is a big talking point.

I am of the opinion that WERs lost any perceived value the minute +’s were being shoved on the end for when there wasn’t another letter to go to. It turned demonstrations of that part of the sales process stupid, and only served to confuse home owners rather than inform. If we’re going to stick with this system, then it most definitely needs to be brought back to the A-G scale and nothing more. No +’s, no other symbols, just a letter and a number. That’s all that scale needs. Simple.

By the looks of the statement this all needs to be done by 2019. Which just so happens to be the year we’re supposed to leave the EU. Wonder if this will be something else kicked into the long grass for another year?

I was tweeted this morning by Phil Brown, from Pilkington, to give clarity on the proposed changes to the Energy Ratings Label:

So it would appear that these changes will not apply to the UK Window Energy Ratings. In which case, we will be stuck with A ratings that have numerous +’s tagged on the end of it.

I would call upon BFRC to look at what is being proposed in Europe and amend here too. As there isn’t yet a pan-European Window Energy Ratings label, that appears to be the reason why these changes would not apply to us. There are plans for such a thing, but I think it would be unlikely to affect the UK as Brexit begins tomorrow and anything that isn’t law now isn’t going to be carried over via the Great Repeal Bill.

Nothing to get excited about in the end.